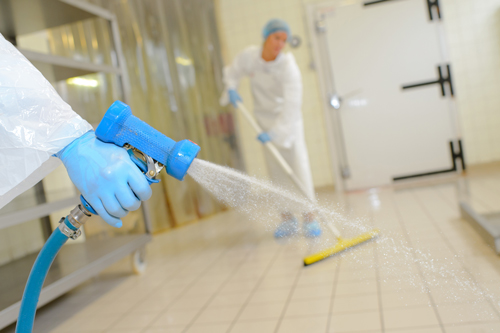 Although machines may be hygienically designed with smooth and easily cleaned surfaces, the crevices in components such as mounted bearings and their housings can harbour bacteria.

Pressure washing can drive these food particles and bacteria through the bearing shaft gap and into spaces around the bearing’s housing which never dry. By the same token, bacteria sheltering and breeding within the unit can be subsequently washed out, together with contaminated lubricating grease, and spread elsewhere.

Relubrication practices often compound the problem. Regular flushing out and replacement of grease to remove its contaminants, and restore its lubricant properties can result in over-greasing, creating another source of contamination. Contaminated grease may be washed onto floors, and then trodden more widely, or into drainage holes, where it makes removal of listeria very difficult.

All cleaning methods tend to extend the distribution of bacteria, particulate matter and grease. Most alarmingly, research shows that a high-pressure, low-volume spray lance can raise them to a height of three-metres in an aerosol of small water droplets. These may remain airborne for several hours before falling onto everything within a seven-metre radius.

The designers at SKF have responded with the SKF Food Line ball bearing unit - Blue Range. The range’s superior sealing prevents penetration by microbes and leakage of grease, so it is relubrication-free.

Following the rules of hygienic design, the units feature smoothly shaped surfaces and a self-draining geometry. Polypropylene (PP) has been selected as the material for their moulded housing, because of its highly inert and chemically resistant properties. Components have been coloured blue for easy detection by eye.

Total exclusion of detergents is almost impossible, as their formulations are purpose-designed to pass through barriers. The new units have another sealing innovation which deals with this: the gutter concept. Its structure blocks most of the detergent, but the small amounts which do enter the seal’s top lip are directed around and out the other side.

These premium bearing units come at a slightly higher price, as you would expect, but the investment is quickly repaid through operational savings. Their service life is longer, and there is less need for cleaning, while the labour, downtime and material costs of re-greasing are eliminated. Moreover, they could spare you the considerable expense and reputational damage of bearing-related product recalls. 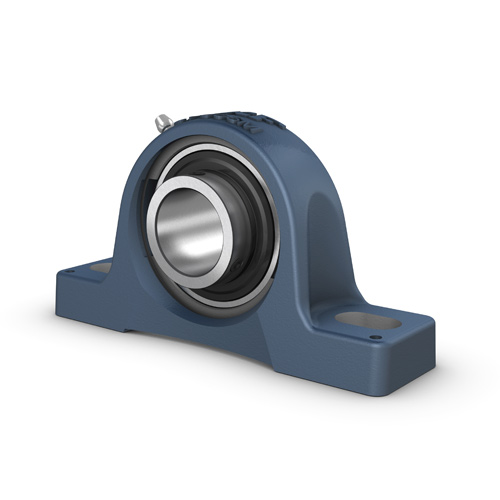 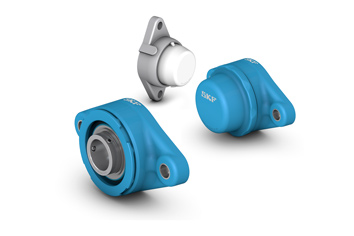